A Few Words About Notebooks¶

Computational notebooks are the modern version of the traditional scientist’s laboratory notebook. Such notebooks have been used by scientists for hundreds of years to keep track of their ideas and experiments in physics, chemistry, biology, etc…

Here is a very special example of a traditional laboratory notebook. A page from Galileo Galilei’s notebook in which he documented his first observations of the moons of Jupiter 400 years ago: 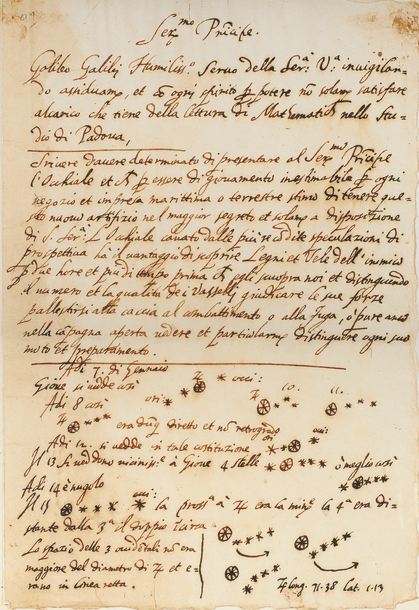 You can think of it as the first Jupiter notebook 😎 and if you know Italian let me know what it says.

I grew up playing an Atari 2600 like the one shown in this picture:

I spent endless hours of fun playing so many of its games.

In 2013 Deepmind published a Reinforcement Learning algorithm that surpassed human level performance on some of its classic games. The video of their agent learning to play and then master the game of Breakout stunned the world:


Since then Atari games are used as a benchmark for Reinforcement Learning algorithms.

When I started learning Deep Learning and Deep Reinforcement Learning I found myself spending too much time trying to customize the computer code running the Atari games, and so it made perfect sense to me to spend a whole lot more time, I mean, way more time, programming a completely new environment, and so Jupylet came to be.

I still remember the day my dad brought home the Commodore 64 and we connected it to the TV set for the first time. It is such a beauty - take a look:

Just as with the Atari 2600 I spent countless hours playing its wonderful games, which made my parents worry quite a bit 😎 but like many other kids I soon tried to program it, and then to program basic games with graphics and sound, and soon I got carried away down the rabbit hole of computation into programming wonderland.

It is a wonder land in which you can turn any idea that pops into your head into a something that works and sounds and plays just like you dreamed it.

The Commodore 64 was the perfect conductor for that kind of magic. Soon after I started programming Jupylet I realized that what I really wanted is to try to recreate this kind of environment for today’s kids.

The Commodore 64 had a gem of a chip hiding inside it - the 6581 SID chip which was a very sophisticated sound synthesizer for its time:


As I was programming the sound synthesis framework of Jupylet I revisited the epic Commodore 64 Programmers’s Reference Guide and I was stunned to see how advanced it really was.

It had three independant waveform generators that could generate sine, triangle, sawtooth, pulse waveform with variable duty, and white noise, and you could use the amplitude of one to modulate the frequency of another! It had a classic ADSR envelope generator, and it had a filter that you could use as lowpass, highpass, or bandpass and sweep its cutoff frequency dynamically.

And its epic guide explained all of it clearly in a language that a child could understand and in depth that a musician would find useful and professional programmers appreciate, starting with what sound waves really are, explaining fundamental frequencies and harmonics, and all the way to describing frequency sweeping and how to code the computer to control all of the synthesizer’s parameters dynamically.

It was recently included in IEEE Spectrum Chip Hall of Fame and nearly 40 years later it still has a following of fans.